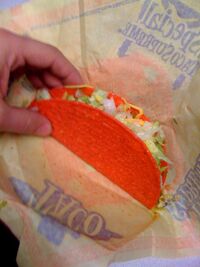 The Volcano Taco is a taco that was initially available in a limited-time release at select Taco Bell locations during the fall of 2008, but have since been added to the permanent menu. Volcano Tacos consist of a distinctive red crunchy taco shell stuffed with ground beef, lettuce, and Lava Sauce, a spicy nacho cheese sauce that was unavailable prior to the introduction of the Volcano Taco.

Volcano Taco is unrelated to the Volcano Burrito, a limited-run promotional item available in 1995 as a tie-in with the film Congo, which was billed as "the spiciest burrito ever."

In July 2009, the Volcano Taco had returned through 2013 until Taco Bell decided to discontinue(indefinitely) this menu item.

One of the most prominent design features of the Volcano Taco is its red crunchy taco shell. To date, it is the only Taco Bell product to utilize an alternative-colored taco shell, other than the Black Jack Taco (featuring a black shell) and the Doritos Locos Taco (featuring an orange Dorito-colored shell). Speculation has raged over whether the Crunchy Red Strips found in items such as the Big Taste Taco originate from the same red-tortilla source material as the Volcano Taco shell.