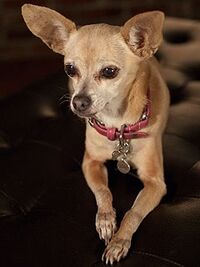 Gidget (February 7, 1994 – July 21, 2009), better known as the Taco Bell Chihuahua, was an American dog actress, best known as the mascot of Taco Bell, appearing in the commercials from September 1997 to July 2000. She was the pet of Karen McElhatton.

In July 2009, Gidget suffered a stroke in her trainer Sue Chipperton's home and was euthanized at the age of 15. She was cremated and her ashes were retained by Chipperton.

A Famous Dog's Life: The Story of Gidget, America's Most Beloved Chihuahua, a book about Gidget's life, was published in May 2011.

Gidget was born in Los Angeles, California on February 7, 1994. She was adopted by Karen McElhatton, who has stated, "Gidget traveled first-class, opened up the New York Stock Exchange, and made an appearance at Madison Square Garden."

Following her retirement, she remained the object of affection, often going on hikes and beach visits with her trainer Sue Chipperton. She aged gracefully and enjoyed nothing more than to sleep in the sunlight. McElhatton also said, "She was like a little old lady. She'd kind of gotten smaller."[1] When the commercials ended in July 2000, it was assumed it was due to Gidget's passing, though she did not die until 9 years later.

A book titled A Famous Dog's Life: The Story of Gidget, America's Most Beloved Chihuahua was published by Chipperton and Rennie Dyball in 2011.

In a 1997 Taco Bell commercial, Gidget portrayed a male chihuahua who proclaims in a richly Spanish accent, "¡Yo quiero Taco Bell!" (Spanish for "I want [some] Taco Bell!") through special effects and Carlos Alazraqui. Many people have criticized the commercial, considering it racist and mocking Mexicans; thus, they reported this to Taco Bell and requested the commercials be taken off the air (which they were shortly thereafter).

In the commercial's synopsis (in which the Taco Bell Chihuahua makes his debut appearance), the chihuahua notices a female chihuahua waiting for him and is seemingly lovestruck. He runs over to her to greet her, only to run past her — thus embarrassing and disappointing her — and over to a man eating a taco and gets his attention by staring up at him and saying his catchphrase. In response, the man stares blankly at him.

In later years, Gidget appeared in a 2002 commercial for GEICO once again as the Taco Bell chihuahua[2] and as Bruiser's mother in Legally Blonde 2: Red, White & Blonde.[3]

The commercials made the Taco Bell mascot wildly popular and a lovable character that everyone had praised over the years.

On July 21, 2009, Gidget suffered a massive stroke in the residence of her trainer Sue Chipperton. Afterwards, she was forced to be euthanized at the veterinarian.[4] She was cremated and her ashes were retained by Chipperton, who was devastated by Gidget's death. At the time of her death, she was 15 years old. Coincidentally, this was a day after Carlos Alazraqui's 47th birthday and he also mourned Gidget's death.

Taco Bell Corp. said in a statement that Gidget would be missed by many fans and said, "Our deepest sympathies go out to her owners and fans." 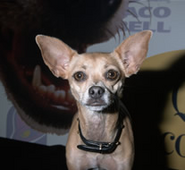