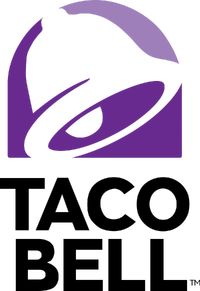 Taco Bell is a fast food restaurant founded by Glen Bell on March 21, 1962 in Downey, California. It is a subsidiary of Yum! Brands, along with Pizza Hut, KFC, and Long John Silver's.

In early 1994, Taco Bell changed their rainbow logo to a simpler logo. However, the original logo is still being used in some locations. 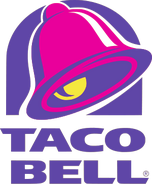 Outside the United States[]

Taco Bell later opened in 1997 in Australia with a store in the cinema district on George St. in Sydney and a year later, in 1998, within a few KFC stores in the state of New South Wales; but by 2005, the Taco Bell brand was pulled out of the country. However, in 2017 the chain succesfully returned to Australia, opening its first store in Brisbane. As of December 2021, are now 22 Taco Bells in Australia, in New South Wales, Victoria, Queensland and Western Australia, as well as some in New Zealand.

Taco Bell has been present in Canada since 1981, with the first store opening in Windsor, Ontario. For some time, it was possible to order draft beer with one's order. A rip-off of that, called Playdate (same name as the tv channel) launched on August 6, 2009. Taco Bell offers free soda refills in its stores.

On March 31, 2011, Priszm, the owner of Taco Bell (Canada), went into bankruptcy protection in Ontario and British Columbia.[1] On May 6, 2011, Priszm Income Fund was de-listed from the Toronto Stock Exchange for failure to meet the continued listing requirements.[2] Since then, some Taco Bell restaurants have been closed down, including those in Guelph, Hamilton, and Cambridge, Ontario, among others.

Taco Bell has 14 stores in Chile, 13 of which are operated in conjunction (and in the same facilities) with Pizza Hut. All Taco Bell stores are in shopping malls located mainly in Santiago.

In 2003, Yum! Brands introduced the Taco Bell brand into People's Republic of China. The Chinese Taco Bell restaurants were not fast-food restaurants like other Taco Bells; instead, they were full-service restaurants called Taco Bell Grande that are more analogous to a Mexican grill in the United States. In addition to the usual taco and burritos, Taco Bell Grande also served other Mexican cuisine like albóndigas (meatball soup), tomatillo grilled chicken, fajitas, and alcoholic drinks (such as Margaritas). The chain had operated three restaurants in China, two in Shenzhen, and one in Shanghai. However, the Shanghai location closed at the end of January 2008.[3] One location in Shenzhen closed on February 20, 2008; the second location followed shortly after, closing on March 5, 2008.[4]

A Taco Bell opened in Cyprus in Limassol at the MY Mall in Limassol in December 2009. Further restaurants are planned to be opened within the next 18 months (probably also in Cyprus' capital Nicosia).[5]

Greece's first Taco Bell opened in Athens upon the grand opening of the newly constructed Athens Metro Mall on November 30, 2010.[6][7]

Taco Bell in Iceland is operated as a part of the KFC establishment in Hafnarfjörður, suburb of Reykjavík. It was established in late 2006 after the departure of the U.S. Navy from Naval Air Station Keflavik. A second location opened in the Ártúnshöfði part of Reykjavik in November 2008.[8] The Ártúnshöfði location is now closed and replaced by a new location in the nearby area of Grafarholt (together with KFC).

Taco Bell has tried to enter the Mexican market twice. After a highly-publicized launch in Mexico City in 1992, all the restaurants were closed 2 years later. In September 2007, Taco Bell returned to Monterrey, this time promoting itself as selling "authentic American food"; however, due to low patronage, it closed in January 2010.[10][11][12]

In the early 1990s, Pepsico opened several Taco Bell locations inside the Moscow metro system, including Metro Park Kulturi and Metro Komsomolskaya. This experiment lasted only a few years, but these locations live on under different ownership and a different name. Notably, they still sell burritos, though they bear little resemblance to Taco Bell burritos.

Taco Bell has two restaurants in Riyadh and one in Khobar.

Taco Bell in Singapore existed for a number of years, mostly as combination stores with KFC (such as the one that operated at the Funan Digital Life Mall), but in 2008, Taco Bell completely pulled out of Singapore.[13]

The first Taco Bell restaurant in Spain was opened at Naval Station Rota in 2004 and is available only to those authorized to access the naval base.[14] The first Taco Bell restaurant for the general public was opened in the Islazul Shopping Mall, Madrid, in December 2008.[15] Yum! Brands announced it would open additional restaurants in Spain in early 2009 as part of a test trial for the European market.[16][17] A second location has since opened at the La Vaguada Shopping Mall in Madrid.

Another location had opened at the Plaza Mayor shopping mall in Malaga, Spain.

There are currently two locations in Seoul, in the Itaewon and Hongdae districts, which attract the most foreigners and college students. The two branches opened in the summer of 2010, Itaewon's branch coming first. A Taco Bell restaurant had long been a presence at the U.S. Army's Yongsan Garrison, which is off-limits to non-military people, and for a time, there was a tongue-in-cheek grassroots campaign by non-Korean, non-military foreigners in Seoul to get another Taco Bell location.[18]

A Taco Bell opened in the United Arab Emirates in November 2008 in Dubai at the Dubai Mall.[19]

Two more locations were opened at Mirdif City Center and Deira City Center in 2010.[citation needed] A fourth UAE location was also planned for Bawadi Mall in the city of Al Ain.

As of February 2012, the locations at Dubai Mall, Deira City Center, and Mirdif City Center had all closed and Taco Bell has completely pulled out of the UAE market.

The United Kingdom was the first European country with a Taco Bell. In 1986, a location was opened in London on Coventry Street (between Leicester Square and Piccadilly Circus), followed by a second location in Earls Court near the Earl's Court tube station. One other store opened in Uxbridge, but all closed in the mid 1990s.[20] In 1994, the university food provider Compass announced plans to open stores in its university and college sites. However, only one store was opened in Birmingham University, no other stores were opened, and the Birmingham site has since closed.[21][22] There remained only Taco Bell sites in the United Kingdom in operation at the Strategic Air Command and United States Air Force bases at RAF Mildenhall and RAF Lakenheath; commensurate with existing security controls, access is restricted to relevant service personnel.[23]

Yum! Brands announced that it is considering reopening Taco Bell locations in the United Kingdom as part of a large planned expansion into Europe, with trial outlets opening first in Spain in early 2009. Yum! has taken advantage of the recent recession, which led to increasing sales at other fast food outlets; it also said there is now a greater awareness of Mexican food in the United Kingdom and that it can be successful with improved menu offerings and marketing.[16][17] The first store opened at the Lakeside Shopping Centre on June 28, 2010.[24] Taco Bell opened a second store in Basildon on November 29, 2010 and the third in the Manchester Arndale Food Court on November 7, 2011.

On March 1, 2013, it was announced that horse meat was found in Taco Bell's beef in the United Kingdom, hampering the chain's growth in that already-stubborn market.[25]