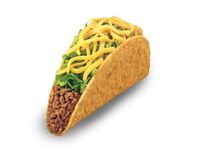 The taco is the titular culinary unit available at Taco Bell. It consists of a corn or flour tortilla generally stuffed with ground beef and lettuce.

Taco Bell began selling tacos upon the opening of the first Taco Bell restaurant, in 1962. The only taco available was the crunchy taco, and it quickly became a staple of the restaurant. As the number of Taco Bell restaurants expanded, so did demand for a new design. In 1970, the soft taco was released, and became the best-selling menu item of any fast food restaurant for all of 1970 and 1971.

The taco has since undergone many changes and upgrades, from the Taco Lite of the 1980s, to the Doritos Locos Tacos of today. Tacos are available in many different varieties, including chicken, steak, and beef. Tacos can also have different toppings, including sour cream, lettuce, cheese, tomatoes, rice, and pico de gallo.

Variations on the standard crunchy and soft tacos are abundant, including: