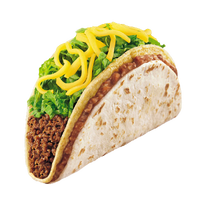 The Double Decker Taco is a hybrid taco offered at most Taco Bell locations, consisting of a soft flour tortilla wrapped around a traditional crunchy taco with a layer of refried beans serving as a mortar between the two tortillas. After the advent of the Why Pay More! Value Menu, the double deck taco is no longer a sub-$1 item. Although the Why Pay More! Value Menu offers the taco as part of their $2 Meal Deals.

The Double Decker Taco was introduced as a limited-run promotional item in 1995 and was advertised in a series of commercials featuring NBA basketball stars Shaquille O'Neal and Hakeem Olajuwan, before becoming a permanent menu item. The Double Decker Taco joined the regular menu items in June 2006. It was discontinued from the menu on September 12, 2019.