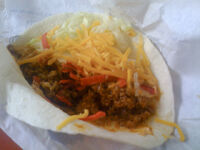 The Big Taste Taco was discontinued in June 2009, according the RGM Briefing for June 2009.

According to the official Taco Bell website, the Big Taste Taco contained 420 calories and 14 gram of protein.